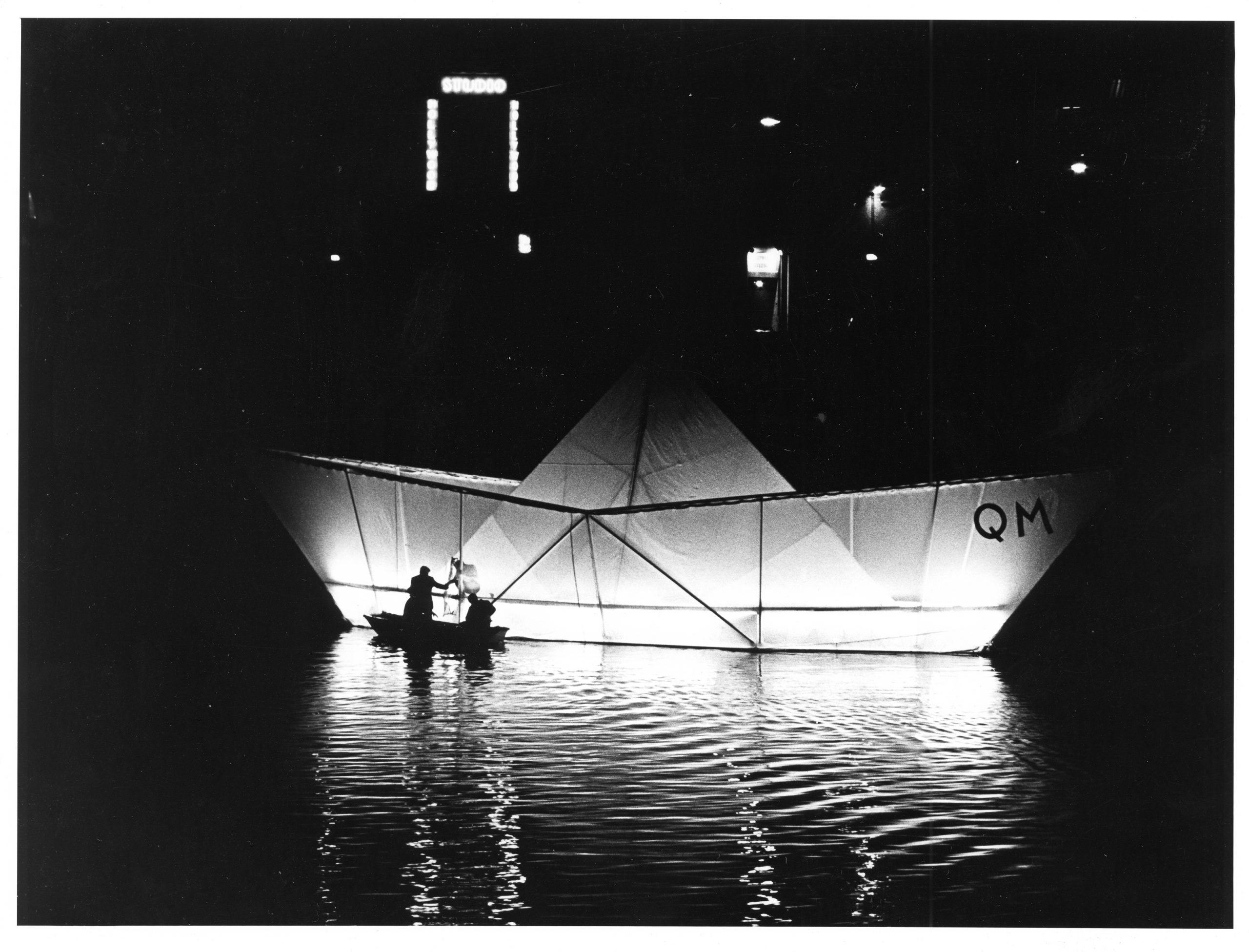 A paper boat confounded the prevailing winds and wisped its delicate Atlantic way from Scotland to, would you believe, the North Cove Harbour down by Battery Park City.  It drifted past Liberty, and was crisp with anticipation, for it was mid-July and its happy compass had delivered it safely to America.  God and Neptune be praised!  On its stern – no one knows which, were the letters ‘QM’ – and no one knew exactly what they meant but it didn’t stop everyone from guessing that they meant something.

It appears that the delicate craft was built in Glasgow on the River Clyde for the Origami Line whose president said that it had saved his company from folding up.  Other Clyde-built ships were the Queen Mary, the Queen Elizabeth and the QE2.  Could the letters ‘QM’ mean ‘Queen Mary’?  In Scotland the heady days of big shipbuilding are gone. Clyde shipbuilders now wield scissors, wear trainers, and have cut out smoking at work.  They are building ‘paper boats’.

Their broad Scottish boast is that the ‘QM’ is the biggest in the world.  It was folded up carefully from a sheet of a secret sort of paper measuring 120 ft x 80 ft.  The needed a space the size of a football field to do this and a day when it wasn’t windy.  No technical details have been revealed, but it is said to be driven by a powerful question-mark.  Nowadays the Clyde men keep their paperwork close to their chests for they were once too generous with their knowhow, and now the rest of the world builds, ships and they don’t.  By building The Paper Boat it would be said that they have turned over a new leaf.

‘QM’ was pushed into the ocean off the west of Scotland where, quite naturally, it entered a Scotch mist.  It was lucky to be offered pilotage by an albatross who said it knew the way to New York.  Half-way across, The Paper Boat saw some icebergs, and mistaking them for other paper boats, meandered off-course to say “Hi!”  It was not a warm relationship, but this deviation took ‘QM’ north where it got dirtied by a slick seeping through from Alaska.  Meanwhile its Captain and crew flew over it on Flight BA172 to JFK and looked down on it to check its course.  They felt reassured when the albatross pecked at the Boeing’s window about one hundred sea miles east off Nantucket.  Below, the ‘QM’ looked resplendent except for the Alaskan oil along its waterline.  Two days later she entered the Hudson River at dead of night, and her captain was there to hook her ashore with his walking stick.  This happened at the old heli-pad at Battery Park, and the idea was to scrub off the sludge and freshen up with hot steam so as to look good for the big occasion.

The big occasion was to berth at the World Financial Center where ‘QM’ was to deliver greeting to America as declared on its manifest – and also a wee bit of cargo.  Someone said that the vessel was carrying the conscience for capitalism.  The crew wondered if they had heard right.

The albatross had sloped off at Nantucket as it was only interested in crossing oceans and consequently The Paper Boat  nearly lost it way.  In the inclement weather it thought Lower Manhattan was Anchorage, Alaska.  Luckily three observant seagulls came to the rescue and flew overhead to line her up for a precise entrance into North Cove Harbour. The Captain hailed an assembly of New World inhabitants leaning against a long quote from Walt Whitman, and they hailed back that this was indeed New York.  It was a poetic moment.

The Captain immediately produced his ukulele and sang a much-needed sea shanty.  His tuneful greeting was reinforced by no less than four Scottish bagpipers and a display of the powerful question-mark – it all seemed to mean something.  The Captain rowed ashore in his golden dinghy, taking his golden suitcase with him and the wee bit of cargo.  The display of gold was not intended to be brash – merely in defence in the dazzle of the World Financial Center.  After a short exhibition of fancy rowing, the Captain clambered on to the marble dock to be met by no less than two kilted drummers, and was marched off to meet the welcoming dignitaries.  He remarked afterwards that it had an uneasy touch of The French Revolution about it, but does not wish to dwell on this point.  Those assembled to receive him held high office in New York and in the world of the World Financial Center, and in his own part of parts beyond the seas, namely the UK.  Greetings were made to one another, and it was the same with speeches.

The Captain then produced the wee bit of cargo and said it was a ‘Spire’.  It was a simple device comprising of a long thin rod with a stone secured at one end.  The upper end of the rod was moved by the wind and it was counterbalanced at its lower end by the stone helped a lot by gravity.  It swayed like a mast, for it was secured upright in a gimbal – a simple balancing device more to do with sailors than bankers.  The Captain said the ‘Spire’ was a portable sculpture designed to celebrate the place on which it stands and beyond that, its importance  was of no importance and that it was really for the planet, for: “air stone and the equilibrium of understanding”.

He also mentioned that the original native inhabitants of these shores would have readily understood this and no one could think quickly enough to disagree.  It seemed it was an ecological statement not commensurate with the state of the nearby Hudson.  The captain then opened his golden suitcase and displayed the log-book of The Paper Boat. In it was recorded the QM’s manifest, the purpose of which was to make things plain; clear; apparent; beyond doubt; evident; open; visible.  The log was to be placed in a prominent place for perusal in in the World Financial Center to make things particularly plain to a particular type of public.

Conscious that The Paper Boats’s port of call was the naval button of the world of finance, it had seemed to the Captain, namely George Wyllie, a Scottish Scul?tor that there was something requiring to be made plain; clear; evident; – and so on.  The Captain, braced by trans-Atlantic energy, made his report.

“Greetings!” – to all whom these presents shall come… take note that this year 1990 is the bi-centenary of Adam Smith, author of the classic rules-book for capitalism, The Wealth of Nations, and that I, Master of this paper boat, do hereby deliver this manifest.  Here this…. Adam Smith once Professor of Moral Philosophy at the University of Glasgow, who breathed the good air of Scotland, would never have wished upon any society the iniquities presently engendered by the system he expounded.  Be aware that I, a Scottish captain, sailing out of the Port of Glasgow, and born in that place, do hereby swear by its air and its stones and the good nature of its people, that Adam Smith earnestly professed that another volume of his philosophy be applied as equal to his Wealth of Nations.  Your own good Professor Heilbrouner right here in New York, has already understood the correct necessity to publish them together in The ESSENTIAL Adam Smith.  As a Scot, a bit calvinistic, sparingly subversive, five feet eight inches, stocky, fairly ancient, emerging here from a Brigadoon mist with nary claymore, I claim due entitlement to deliver this neglected document for the  benefit of your attention.  Dear American friends, it is with warm pleasure that I present for the enlightenment of us all, Adam Smith’s OTHER BOOK – The fifty per cent of his good intentions left sleeping down below.  It is not so much that we have been living a lie since 1790, but rather that we have been living an omission.   Boats should – but probably won’t, be rocked by belated awareness of Adam Smith’s pride in this conscience of capitalism.  We may need and be glad of it yet – his Theory of Moral Sentiments.  Take heed of the first sentence.

How selfish so ever man may be supposed, there are evidently some principles in his nature, which interest him in the fortune of others, and renders their happiness necessary to him, though he derives nothing from it except the pleasure of see it.

Having made his report, The Captain felt hungry for the official lunch where he was accorded the great indigestive respect that accompanies wariness.  Notwithstanding, he was able to knock-off his food and the essential matter of morality in the same way as any profundity is understated in dear old Glasgow town.

Could it be the QM stands for Question Mark?